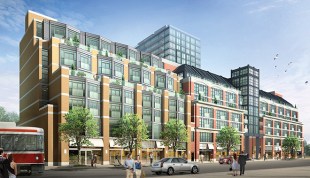 If you drive along Queen Street West now you’ll see lots of activity and commercial development: local Fresh Co, Curry’s Art store, art galleries, hopping bars, restaurants, pubs, coffee shops and of course the popular Trinity Bell Woods Park. But years ago this area wasn’t anything like it appears now. The formally Bohemian neighborhood is now a mix of old school, eclectic fun with upscale boutiques and restaurants.  In fact The Drake moved into the area in 2004 and then followed the Gladstone hotel. The Drake was the first sign of the start of gentrification of the neighbourhood. The area now is known for its art scene.

Standing proud is an 8 story tower fronting on Queen St at 1169 Queen and 19 story tower located just behind at 1171 Queen. Be lucky enough to snag a two level soft loft with a large terrace!

The Bohemian is managed by Dash Property Management. Residents can enjoy the array of amenities including a 24 hr concierge, party room, rooftop terrace with BBQs, guest suites and visitor parking. 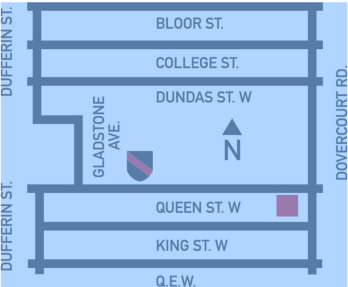